by Liz Hume. Reprinted from The Hill. 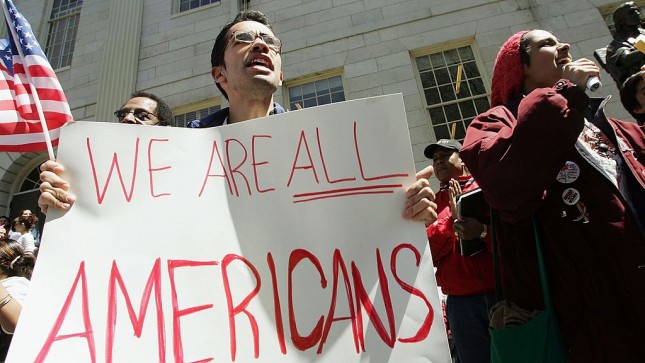 As we inch closer to the U.S. presidential election, America has endured another week in which the politics of hate and fear have taken center stage. Regardless of the election’s outcome, the campaign has exposed and exacerbated class, race, sex, and ideological divisions in the United States — and it is clear we need to repair these divisions by engaging in a process of dialogue and reconciliation.

While previous presidential campaigns focused on what brings us together as Americans, this election has sunk to new lows in exposing our differences, in painful, insulting ways.

While the politics are hateful, this focus on “difference” is actually in keeping with our deepest neurological wiring.

In an interview for the Shift Network’s “Summer of Peace,” Brandeis Professor Mari Fitzduff discussed research highlighting that human beings have a biological disposition to resist change of any kind, and that we tend to feel more comfortable with those “like us.”

Difference, she says, is something that triggers the fear center in our brain, the amygdala, and makes us aware of and notice the differences between us and others. As Fitzduff noted, “Noticing difference is not the problem; it depends on what we do with it.” It is important to understand that behind the anger is fear.

Unfortunately, as globalization creates winners and losers in the marketplace, and as the demographic landscape shifts around the world, many countries are experiencing a resurgence in populist leaders that are taking advantage and stoking our fears to serve their own purposes.

Despite our genetic predispositions, we can and must overcome this fear by communicating and engaging with others in meaningful dialogue and building trust across groups.

There have been many transformational leaders, like Nelson Mandela and Martin Luther King Jr., who have led the way.

While our natural inclination might be to stigmatize difference and to see other communities as posing threats, these leaders recognize and celebrate commonalities and opportunities, seeking to be leaders for all. They transcend the borders of their communities by exploring and investigating new ideas, reaching out to different groups, and by serving as a bridge between disparate communities and divided societies.

If we have any hope of repairing these divisions after our own election, we will have to engage in a process of dialogue and reconciliation across our racial, class, ethnic and political divisions.

We will need to find a way forward that offers a healing agenda, rather than simply a policy agenda, one that recognizes differences but focuses on our commonalities.

America has a strong common narrative — but it has been largely overshadowed by fear and incendiary political tactics. If we do not band together, we risk burning down the democratic structures and the communal voices that have defined us as a nation.

Fortunately, we do not have to rely only on a handful of individual transformational leaders. Ordinary citizens within the United States have been working for decades to resolve and prevent conflicts, and to build bridges between communities.

While some organizations focus on community resilience and conflict resolution, others explicitly aim to develop relationships across ethnic and political divides.

We have the power to activate and support these efforts in every state, and to find new ways of organizing across all of the divides that have been so sorely exposed during this election season.

Social bonding and transcending group boundaries will be central to our healing as we rethink what it means to be American.

Trust must be built between the African American community and the police to avoid further racially charged violence.

Our leaders and presidential candidates must disavow groups like the Klu Klux Klan, and denounce hateful rhetoric from fringe groups immediately, rather than waiting weeks.

We need to overcome our fear of difference and engage with Muslim communities in a positive rather than negative way in order to stop the marginalization and alienation of those communities.

We must stop vilifying recent immigrants and creating an “us versus them” mentality. Instead, we need to transcend our differences by understanding the motivations, fears and dreams of communities outside our own, and to unite ourselves by engaging in meaningful dialogue.

We may not always agree, but it is the basic DNA of peacebuilding to learn to listen to alternative viewpoints, and to understand communities outside our own.

In an increasingly diverse and multicultural world, we must take responsibility for our fear and instill in ourselves and those around us the confidence to overcome our group boundaries and our conservative predisposition to remain with our “own kind” in pursuit of a common goal: peace and security for everyone by rejecting the politics of hate and fear.

Hume is the senior director for Programs and Strategy at the Alliance for Peacebuilding.
Close Menu