Could polarization be a prelude to a renewal of ‘From many, one?’ You bet it could. 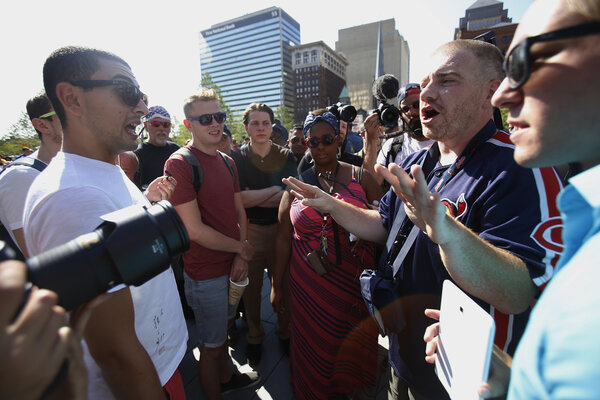 America’s polarity is achieving remarkable intensity, noted in many news stories, now vividly being reported at the current national political party conventions.  That said, overlooked by the media, there are not one but two kinds of polarization: constructive and destructive.

The media are fixated on the destructive.

They overlook the positive power of polarization.

Don’t fall for it.

Political parties emerged immediately after the retirement of President Washington. It was an organic and healthy development. As MoveOn co-founder Joan Blades and I wrote last year in The Huffington Post, President Washington, in his farewell statement, warned of negative polarization:

The alternate domination of one faction over another, sharpened by the spirit of revenge, natural to party dissension, which in different ages and countries has perpetrated the most horrid enormities, is itself a frightful despotism.

“Horrid enormities,” reportedly, are what is happening today. As reported by Shane Goldmacher and Annie Karni in Politico in Trump, Clinton run on opposite sides of a fractured America:

In so many ways, you feel that there’s nobody that represents the whole,” said Peter Hart, who has been a Democratic pollster for 50 years. “That Donald Trump has his constituency. That Hillary Clinton has her constituency. And they are talking to their part of the world, and neither is really talking about how you knit a country back together.”

… But even as they pledge healing and unity in a moment of national mourning, the presumptive Democratic and Republican nominees are assembling competing political coalitions with so little overlap that it will be hard for either to emerge as a unifying figure.

Peering more deeply there is George Saunders, in an astonishingly great article in The New Yorker, Who Are All These Trump Supporters:

Intellectually and emotionally weakened by years of steadily degraded public discourse, we are now two separate ideological countries, LeftLand and RightLand, speaking different languages, the lines between us down. Not only do our two subcountries reason differently; they draw upon non-intersecting data sets and access entirely different mythological systems. You and I approach a castle. One of us has watched only “Monty Python and the Holy Grail,” the other only “Game of Thrones.” What is the meaning, to the collective “we,” of yon castle? We have no common basis from which to discuss it. You, the other knight, strike me as bafflingly ignorant, a little unmoored. In the old days, a liberal and a conservative (a “dove” and a “hawk,” say) got their data from one of three nightly news programs, a local paper, and a handful of national magazines, and were thus starting with the same basic facts (even if those facts were questionable, limited, or erroneous). Now each of us constructs a custom informational universe, wittingly (we choose to go to the sources that uphold our existing beliefs and thus flatter us) or unwittingly (our app algorithms do the driving for us). The data we get this way, pre-imprinted with spin and mythos, are intensely one-dimensional.

Saunders conducted some in depth conversations with many rank-and-file Trump supporters.

In the face of specificity, my interviewees began trying, really trying, to think of what would be fairest and most humane for this real person we had imaginatively conjured up. It wasn’t that we suddenly agreed, but the tone changed. We popped briefly out of zinger mode and began to have some faith in one another, a shared confidence that if we talked long enough, respectfully enough, a solution could be found that might satisfy our respective best notions of who we were.

Well, let’s not get too dreamy about it. We’d stay in that mode for a minute or two, then be off again to some new topic, rewrapped in our respective Left and Right national flags.

Polarization can be sublime. Constructive polarization means that the political parties (and conservative vs. progressives) must seek to compete – hard – over who can provide the best plan to improve the general welfare.

I am scored as far right as their meter reads by the fascinating website AllSides.com, dedicated to featuring, well, all sides. I was called by a Washington Post Magazine columnist earlier this year as “the second most conservative man in the world.”

And I love my left wing adversaries. Spitting in each another’s faces is not polarization. It’s a personal foul. The positive power of polarization is honest competition with true respect for our adversaries.

The iconic radical Saul Alinsky – who fundamentally reshaped politics, a transformation that is still a work in progress – wrote in Rules for Radicals:

One man’s positive is another man’s negative. The description of any procedure as ‘positive’ or ‘negative’ is the mark of a political illiterate. … Each element with its positive and converse sides is fused to other related elements in an endless series of everything, so that the converse of revolution on one side is counterrevolution and on the other side, reformation, and so on in an endless chain of connected converses.

If you push a negative hard and deep enough it will break through into its counterside; this is based on the principle that every positive has its negative.

So, where’s the breakthrough going to come from?

There are leaders, groups and organizations across the nation that have sprung up against the destructive kind of polarization. The best ones understand the opportunity that constructive polarization provides.

Joan Blades (yes, that progressive icon, co-founder of MoveOn.org and MomsRising.org) then co-founded and I (yes, that archconservative columnist) am fully in league with Living Rooms Conversations. Rather than rally groups in tribal warfare against each other, Living Room Conversations brings people together from opposing sides of an issue for a civil, enlightening conversation that values differences.

AllSides.com, whose founder John Gable provides this column series for The Christian Science Monitor, puts opposing views side-by-side to help readers gain a deeper and broader understanding of the issues and each other. It doesn’t pretend that a single solution or perspective is needed, or that the center provides – abracadabra! – the magic formula. That said, AllSides.com is designed to help the blind men – meaning, all of us – discern the real shape of the elephant (or donkey, as the case may be) in the room.

The Village Square, Voice of the People, The Bridge Alliance – just some of the many good organizations who appreciate positive differences. Deborah Devedjian, founder and chief citizens’ officer of The Chisel – another great organization where, fo shizzle!, her team is “Creating a More Perfect Union” – likes to sign off: E pluribus unum. “From many, one.”

Could polarization be a prelude to a renewal of “From many, one?” You bet it could.

Discover the power of positive polarization.

Ralph Benko is a guest columnist for the All Sides series written exclusively for Politics Voices.

Ralph is a national conservative thought leader, columnist, Senior Advisor in Economics for The American Principles Project, editor-in-chief of The Supply Side Blog, and author of The Websters’ Dictionary: how to use the Web to transform the world.