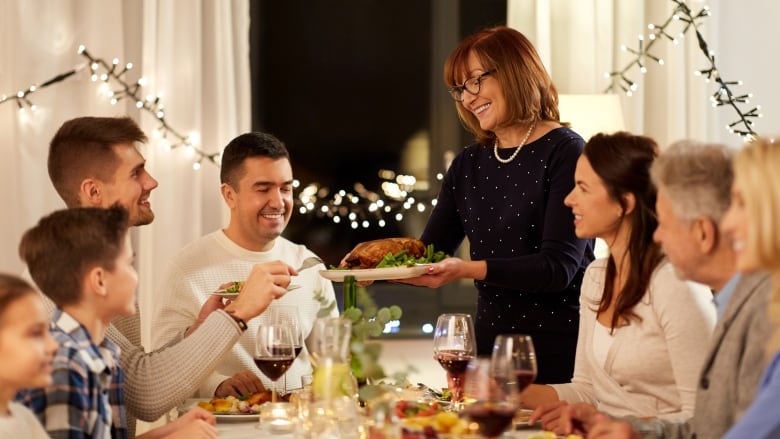 With election day inching closer, politics will undoubtedly be a dish served hot during Thanksgiving dinner.

For some, like Calgary-based photographer Benjamin Laird, the topic has led to some fiery discussions with family around the dinner table.

Though he says they’ve matured, “there have been occasions where someone has left the table and taken their dinner with them or stormed off to another room,” he told Cross Country Checkup.

“It can get a little bit awkward with my family … but I am forbidden from speaking about anything political at my wife’s family’s house,” he added.

Disagreement can sour any party, but according to mediation expert Mary Gaylord, there are ways of tackling tough topics without a food fight.

Gaylord is the managing partner and program developer at Living Room Conversations, a U.S.-based non-profit that works to bridge divides on polarizing issues.

Ahead of turkey dinner, Checkup asked Gaylord how to keep political chatter positive — and keep everyone at the table until pie is served.

According to Gaylord, it’s best to temper expectations about how much one’s opinion can sway that of another.

“Part of it is just coming to the recognition that you are not going to change their mind, most likely. So just give that up,” she explained.

Instead, she suggests opening up and listening. Often, people make the mistake of challenging another person’s viewpoint.

Arguing can often lead to more arguing, she says.

“What you give them is often what you’re going to get back,” she said.

Asking questions with the goal of learning is a good next step, Gaylord suggests.

“If you want to better understand somebody, genuinely show curiosity. Don’t ask ‘gotcha’ questions,” she said.

The best way forward, Gaylord adds, is to ask personal questions rather than highlighting news headlines or data points.

Consider this question she asked her politically-opposite father years ago: “How did your political identity form over the years?”

“So really, asking people, ‘What’s your story?’ that can be really fun and interesting,” she said.

If you’ve tried the above, Gaylord says that every now and then, you just have to cut your losses.

“Sometimes you’ve got to just end the conversation if it’s just going downhill fast,” she said. That can be as simple as saying, “Let’s enjoy the dinner.”

Ultimately, Gaylord says that these types of scenarios offer a choice: People can choose to be right, and they can choose to have a relationship.

“I have decided that with people there are some people I’ll choose not to have a relationship with, and that’s okay,” she said.

“Everybody has their choices to make, but [when] it comes to families for me, I choose relationship over winning or being right.”