Liberal: She was not a callous conservative

Note: This post, by Albanian-born US citizen Rremida Shkoza, originally appeared as a part of CNN's "Fractured States of America" series.

(CNN)I was in my hotel room in New York when I got a call from my friend Tracy Hollister. She invited me to be part of a Living Room Conversation, a bipartisan forum for peaceful, albeit highly political dialogue. The focus of this conversation would be immigration. As Tracy talked me through the process, she explained the conversation would consist of three Democrats and three Republicans -- and that she would be co-hosting with a Republican who had immigrated from China.

A Republican immigrant -- how is that even possible, I wondered. 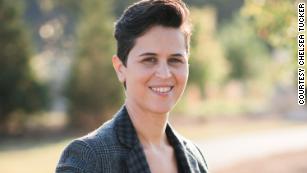 As a refugee born in communist Albania, the immigration issue is deeply personal to me. In March of 1991, my family and I risked our lives crossing the Adriatic Sea, seeking freedom in Italy and ultimately the United States. After 40 plus years of absolute dictatorship, Albanians like us were searching for democracy. And we found it in America.

Or, at least I thought we had until President Donald Trump took office. Though our immigration system is far from perfect, he has injected an authoritarian-like cruelty into it -- separating families at the border and detaining children under inhumane conditions.

And yet here I was, agreeing to dialogue with a fellow immigrant, who seemingly approved of Trump's steps to undermine the immigration, if not democratic, system -- who supported a party I believed was lacking basic human decency.

Still, I determined to enter the conversation with an open mind. And so, when I drove up to our meeting location, I was pleasantly surprised to meet Sue Googe, Tracy's Republican co-host. We bonded over our shared profession -- real estate, our experiences living under communism, and our love of food and people. She even gave me a nickname by the end of our chat -- "little sister."

After I had spoken with Sue and the other participants, we began the formal conversation, each of us sharing a bit of our personal experience with immigration. I emphasized my refugee status -- and the xenophobia I had witnessed when we escaped to Italy in 1991. At the tender age of 12, the Italian children I went to school with taunted me for being Albanian, calling me an animal, among other cruel names. If not for my family and the kindness of a local Catholic church, I'm not sure how I would have handled their bullying.

Once I had finished speaking, I waited for Sue and her fellow Republicans to challenge my experience -- but they didn't. In fact, Julia Song, a Brazilian immigrant and Republican, affirmed the horrifying realities of immigration at the southern border. She also emphasized the importance of not losing sight of the humans at the heart of the debate.
But Julia wasn't the only Republican to make such a statement. Mario Benavente, active in local conservative politics and the son of immigrants himself, shared his own experience witnessing tired and hungry migrants arriving in North Carolina. It moved him in ways he could not have imagined, he said.

At this point, I flashed back to that morning in New York, when Tracy had invited me to participate -- the Republican persona I had pictured in my head, the one who lacked any and all compassion, was not sitting beside me. In fact, what I was discovering is that I had far more in common with these conservatives on the issue of immigration that I had anticipated.

We could all agree that our immigration system needed comprehensive reform -- and that our politicians had thus far failed to deliver such reform. We could all agree that immigration laws need to both protect American citizens and values, while providing humane and just treatment for migrants and refugees. And we all acknowledged that our country was far from perfect. From issues of racism to homelessness to xenophobia, we had a lot of work to do, and we perhaps needed to do some of that work while simultaneously making space for new immigrants in the country.

Where we differed was not in our values -- we all greatly valued freedom and democracy -- but how to balance those values with the need, if not obligation, to help others. As Americans, we want to continue to be a beacon for democratic values, but how do we do that when we struggle with lingering xenophobia and racism, which often exploits the most vulnerable people to arrive in America?

We all want a strong economy, but at what cost? Trump's tax cuts may have boosted the economy, but has everyone benefited? It seems like corporate America has done the best, while the average American struggles to save $400. And though Trump blames illegal immigration for hurting the economy, he might want to reexamine his own tax policies, which though providing a boost to many Americans, provided the greatest gains for the wealthy. Perhaps investing more in working-class Americans -- instead of blaming innocent immigrants and refugees -- might further improve the economy he loves to brag about.

And when I raised these policy differences, I found Julia and her fellow Republicans were somewhat receptive. Julia even discussed the importance of learning more about these immigrants -- what issues are driving them to flee and what the US can do to better address the root problem, including reconsidering how we distribute foreign aid. That resonated with me and felt like a potential bipartisan path forward.

Before this conversation, I thought Republicans had an empathy deficit -- an inability to truly feel for the plight of those less fortunate. But after listening to three Republicans emphasize the importance of humanizing immigrants and assisting those to the extent we can most effectively, I changed my mind.

I left feeling what we lack isn't empathy -- it's a personal connection with those across party lines. That fateful Friday I had the chance to connect with four strangers -- three of whom I can almost guarantee didn't vote for Hillary Clinton in 2016. But if not for my commitment to take a risk and engage with them, I would never have met these open-minded individuals. And I might not have as much hope for the future of this country as I do now.