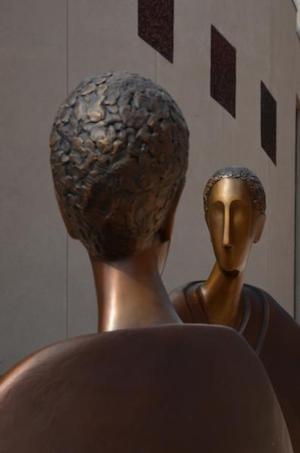 “I don’t want to talk to them because they think too differently.”

“How can I have a conversation with someone who just seems to disagree with everything I think?”

“How can anyone agree with that line of thinking?”

These days it seems that conversations have a lot more in common with competitions than they do with discourses. The thought of people exchanging ideas and learning about and from one another is becoming increasingly rare. Rather, many of us experience the thought of deep dialogues in a manner similar to being summoned to court. It’s as if our opinions are on trial and we can’t help but be in defense. With this tendency, polarizations are appearing to grow at alarming rates and as a result many are reporting a general sense of powerlessness. For this reason, many people are seeking shelter in their siloes of homogeneity out of pure instinct.

Meanwhile in cities all over the country, people from all walks of life are doing something extremely courageous in times such as these. They are talking. More than that; they are having conversations. And with whom are they having these conversations? With people who might vote on the other side of an issue, with people from different economic situations, with people of different races and ethnicities. And what are they conversing about? They are having conversations on a variety of controversial topics simply for the sake of fostering understanding and greater human compatibility. And where are these conversations happening? They aren’t happening in lecture halls or civic centers. These conversations are happening on couches and recliners, in coffee houses and houses of worship, and on the internet in groups of 6 or 7 people one intentional conversation at a time.

Last summer after a string of videoed incidents of police violence, our church decided to host several community conversations. The hope of those conversations was that the attendees would feel empowered to keep the conversations going outside of the church. The ideal of that would have been if the people chose to host smaller group conversations at their homes and with members of their other communities. Little did we know that some other people had the same idea and had already started putting a structure in place to facilitate those hoped for conversations. That group of people collectively created the social entity, Living Room Conversations (LRC).

Born out of the inspiration of Joan Blades, cofounder of MomsRising.org and MoveOn.org, LRC is evolving as the go to model for structuring meaningful conversations across societally established borders. There are no soap boxes and no kumbayas in LRCs. Real people get together and are intentionally present for what can emerge from a true conversation. The team at LRC understands that any conversations of depth naturally incur emotional risk. They minimize risk and maximize participation through preparation. Equipped with either one of the pre-planned conversation outlines or a customized conversation plan based on the LRC model, the participants—all of whom are invited by the host and the co-host—enter into this space knowing that it will be shared with people who hold a variety of views.

As we look to our church’s contribution to the future, I believe that one of our greatest gifts will be that First Congregational Church of Boulder will be known as a church where conversations can happen. In fact, our community has gone so far as to commission a piece of art declaring as such. After all, it was through one of our own community conversations in the summer that we began our communication with LRC. Since that time we have hosted LRCs in our Heritage Room and are looking to leverage this model for greater and deeper conversations within and beyond our building. Right now the world is on the lookout for conversational pioneers from all walks of life. Our hope is that by sharing this tool as well as others of its ilk, we can help empower those who feel called to this service.

Pedro Silva served 8 years in the U.S. Air force before answering his call to ministry. In his post-military years, he worked in both for- and non-profit organizations. Compelled to cultivate his passion of helping people, he enrolled at Andover Newton Theological School in Massachusetts in 2009 and in 2013 earned his Master’s in Divinity. After serving four years as student minister in Massachusetts, he came to Colorado. He is ordained through the United Church of Christ.

Maybe it’s time for a declaration of interdependence

The case for civil discourse