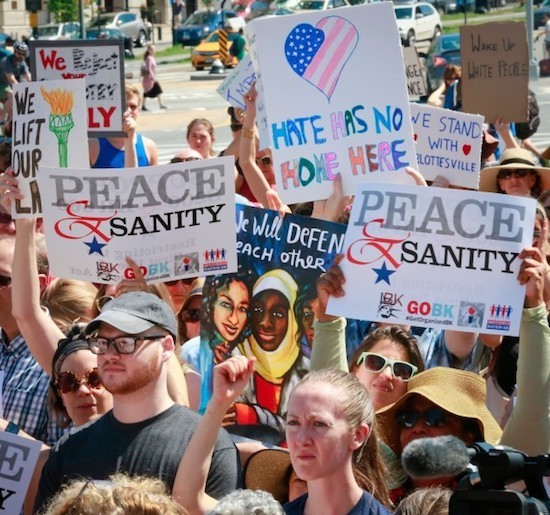 It’s rare that people across the political aisle find common ground on much of anything these days. Health care, tax law, abortion, gun rights, and a litany of other issues will almost certainly continue to divide us for years to come. But the repugnant white nationalist march at the University of Virginia seems to be an area that transcends partisanship — something we can all uniformly oppose.

I graduated from UVA in 2013. While the university wasn’t perfect, I appreciated it for what it was — a place that values intellectual curiosity, rigor, and diversity of background, experience, and thought. Its history is certainly complex and flawed, but at the risk of sounding trite, the present-day community has a particular strength of spirit that pushed me to be better. It’s a life force that drastically contradicts the protests — and the ideology — perpetuated by white supremacists this past weekend.

Which is one of the many reasons I was relieved to see people of all persuasions denouncing the acts of terror.

House Speaker Paul Ryan, a Republican, unambiguously condemned the alt-right demonstrations, stating, “White supremacy is a scourge. This hate and its terrorism must be confronted and defeated.” The Democratic Governor of Virginia, Terry McAuliffe, expressed a similar viewpoint, saying that, “The acts and rhetoric in #Charlottesville over past 24 hours are unacceptable & must stop. A right to speech is not a right to violence.” Republican Senators Marco Rubio, Ted Cruz and John McCain joined with Democratic Senators Cory Booker, Elizabeth Warren and Chuck Schumer in issuing unapologetic condemnations of the nationalist rally.

But while the vast majority agree that the neo-Nazi display was obscene, tragically ending in the death of Heather Heyer, we’re still quarreling along partisan lines. Not about the nature of the events, but about who’s to blame.

Case and point: network news in the proceeding days has been, to be candid, a hot mess — even muggier than usual. I’ve grown accustomed to the arguing on prime time, but recent interviews constitute a sea of shouting matches so loud that the anchors are left desperately trying to regain a semblance of civility.

Ken Cuccinelli, the former attorney general of Virginia and a member of the Republican party, told Symone Sanders, a Democrat, to “shut up” during their heated exchange. Keith Boykin, a Democratic political strategist, sparred with Paris Dennard, an African-American Trump supporter, sarcastically questioning if Dennard is aware that he’s Black. And Ana Navarro, a Republican strategist who often tows party lines, asserted that Trump is “unfit to be human” (whatever that means). The list goes on.

In the wake of heartbreak in Charlottesville, it seems we’ve upped the ante on partisan rancor, if that were possible.

As a journalist, I often have to check my bias. However, I’ll be blunt with mine here — Donald Trump’s response to the showdown in Charlottesville has been wildly distasteful and divisive, and he missed his window of opportunity to decisively repudiate such white supremacist groups. Although not everyone will see eye to eye with me on the president’s remarks, this is a time when we desperately need to come together against a hateful dogma, something that people of all political stripes believe has no place in America. Yet we’re sowing even deeper divisions — precisely what the nationalists that stormed UVA wanted to achieve. “Unite the Right,” they called their rally, in hopes that their unity would cause the rest of us to disperse.

Perhaps CNN host Chris Cuomo said it best at the conclusion of his fiery interview with Cuccinelli and Sanders. “One of the things you do when you see hate is you condemn it,” he said. “The other thing that’s just as important is to counter it … That’s why we use civil discussion on this show.”

“Civil discussion is always the appropriate counter to hate,” he concluded.

In the spirit of Cuomo’s sentiments, I recently engaged an acquaintance of differing opinion on this issue. I’ll be upfront in that I failed miserably, particularly as he introduced his knockout blow. “America is evil,” he said. “Just look at the demonstrations in Charlottesville.”

My stomach sank at his remarks, as did my inclination towards civility. It was a poignant reminder of a hashtag I had seen floating through my social media feed, with photos of torch-wielding KKK members captioned: #ThisIsAmerica. I resented the notion that my university and country are both represented by this image of nauseating hatred. The claws came out.

My approach was flawed, as so often happens in the heat of an emotional moment. Debate rarely surrounds issues of little importance, making it a difficult task to present an argument free of hostility. So, with a commitment to civil discourse, I want a do-over. I want to respectfully share the following:

America is not a sea of white nationalists.

America is Black, White, Brown, and everything in between.

America is not a group of supremacists.

America is an immigrant and a native.

America is not the Ku Klux Klan.

America is Heather Heyer, a woman who died standing up for inclusion and peace.

Recent consensus shows a basic thread: the attacks in Charlottesville this past weekend were an abhorrent display. It seems we disagree on how we got here, what it all means, and what we do next, but it’s a start.

And we do know one thing — such hatred will not be driven out with more fear and rage.

Billy works for AllSides.com as Editor and Content Director where he writes about politics and media bias. Previously, Billy worked as a Communications Consultant at NATO – in that capacity, he served as a writer and editor for several of their publications and assisted with media and video design efforts for multiple international exercises. He is a graduate of the University of Virginia with degrees in Global Development Studies and Music, and currently calls Washington, D.C. home.

We Need to be More Curious and Less Furious

Humanization is the solution